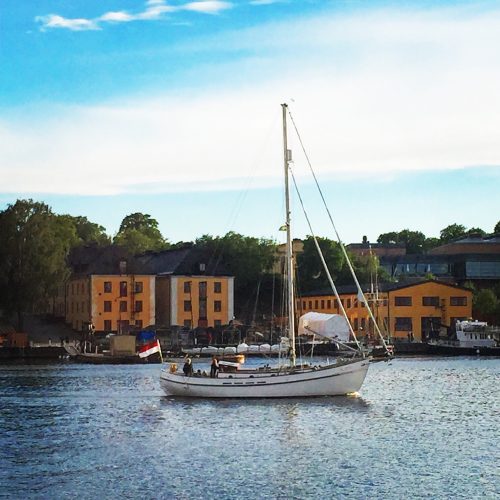 A last-minute summer visit to Sweden? I’ll take it! The beautiful city of Stockholm is at its finest in the warm summer months, so when presented the opportunity to spend two days in the Swedish capital last July, I didn’t hesitate to seize it. Although it was my first trip to Sweden, I didn’t have much time to research and prioritize my plans. My main preparation was following several very cool Swedish-based Instagram accounts to get an idea of what I wanted to see. We arrived in the “Venice of the North” without even a guide book to point us in the right direction. But sometimes lack of planning, combined with lack of time, has its rewards. Especially when the travel destination is a city as friendly and accommodating as Stockholm.

First off, getting from the airport to downtown Stockholm couldn’t have been easier. We boarded the Arlanda Express and were whisked to the train station near our hotel in roughly 30 minutes. We rolled our suitcases around the corner and within minutes arrived at the Radisson Blu Waterfront Hotel. City and water view rooms? No problem. Walking distance to the city’s best sights? Check. And last but not least…breakfast buffet fit for a king? Most definitely.

Other than the people, who were kind beyond compare, my two favorite things about Stockholm were:

My biggest surprise? Being served reindeer meat at a cocktail party. At home, reindeer are synonymous with Christmas, Santa Claus and bedtime stories. I couldn’t eat one sliver of reindeer meat, I’m sorry to say.

Take a look at the photos below for the highlights of my journey. And if you have the chance to go to Stockholm, even if it’s for only a few days — take it! I became instantly smitten with the city and hope to return soon with more time to take in all that it has to offer.