If you’ve set your sights on a tropical island getaway, and want something different and more adventurous than Hawaii, look no further than Moorea, in French Polynesia. Best known for its breathtaking mountain peaks and brilliant blue-green lagoons, Moorea is the ultimate island paradise. 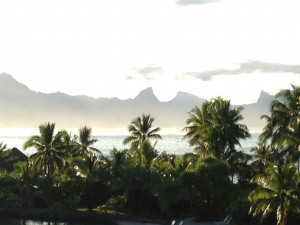 If you go, you’ll find that French is the primary language, but English is also spoken and understood by many of the locals as well as those in tourism. For all the foodies out there, make note that the cuisine combines a strong French influence with fresh seafood and a tropical flair – featuring locally grown vanilla bean and an array of delicious fruits for flavor and garnish.  And if you settle for an all-inclusive hotel experience, you’ll be missing out, because the small villages lining Moorea’s main road boast restaurants that are more than worth a visit. We particularly enjoyed Les Tipaniers and Coco D’Isle — both offering top-quality island food in a casual setting. 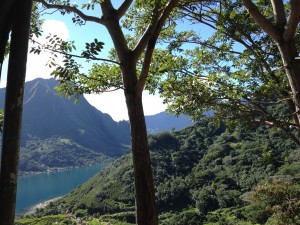 We arrived on this magical isle as a result of an amazing deal that we found on TravelZoo. For $1,250 per person, we flew round trip to New Zealand with a four-day stop in Moorea on the return, and a complimentary stay at the hotel of our choice. 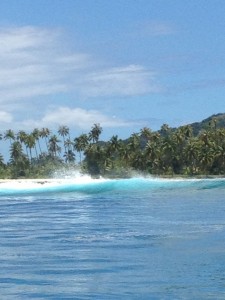 We upgraded that deal just a bit to indulge ourselves at the Intercontinental, which is tucked away in a beautiful corner of the island – far from the hustle and bustle of Tahiti’s capital, Papeete’, which is 10 miles away from Moorea by ferry boat.

Like many hotels on the island, it offers over-the-water bungalows and beautiful lagoons. But at the Intercontinental, the concierge staff was the best I’ve ever encountered. Their recommendation — an $85 per person catamaran ride around the island — was the highlight of our trip. As we weaved in and out of Moorea’s famous reef, we stopped a few times to snorkel and swim amidst black-tipped reef sharks as well as stingrays.

The flight from Los Angeles to Tahiti was a breeze. We flew Air Tahiti Nui, leaving at 11 p.m. and arriving in Papeete’ by 8 a.m. local 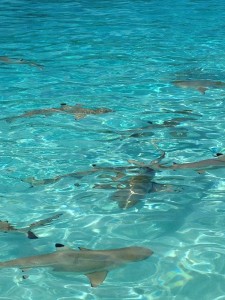 time the next day. The airline takes care of its passengers: flying coach felt almost like first class, and our time in the skies went by much faster than we had anticipated.

So if you’re thinking it’s time for a new twist on an island holiday, try Moorea. You won’t be disappointed.